What if Danville invests in casino development?

Gaming has been banned in Virginia for a long time, except for the lottery, charitable gaming, and wagering on horse races. This could change as soon as 2020 if full-service casinos are allowed in selected areas of the state. The 2019 Virginia General Assembly passed Senate Bill 1126 (SB 1126) which authorized the development of casinos in five localities- Bristol, Danville, Norfolk, Portsmouth, and Richmond. Governor Ralph Northam signed this bill into law on March 22, 2019. However, the enactment of SB1126 is contingent on review by the Joint Legislative and Review Commission (JLARC) and approval by the 2020 General Assembly.

This means that Southern Virginia could be the future home of a full-service gaming casino, if the citizens of the City of Danville approve a referendum, expected to be held in November 2020.

A casino could be a boost to the economy in Southern Virginia. A casino could be a major job creator and revenue generator for Danville, a micropolitan city on the North Carolina border at the crossroads of Highway 29 and Highway 58.  Danville is moving forward with due diligence prior to the citizen referendum. On December 2, 2019, the City of Danville issued a press release and Request for Proposal from enterprises interested in developing a destination casino. Responses are due by January 13, 2020. Casino operators interested in investing in Danville should visit the website here.

While only citizens of Danville can vote in the expected referendum, businesses and community members throughout the region may want to consider the future impacts if a casino is developed in Southern Virginia.

Tax impacts to the state and the City are to be determined, depending on how the legislation is implemented.

There are also anticipated social impacts, from associated crime to problem gambling to most of the casino workers in Danville being likely to earn less than a living wage.

Depending on the size, location, and positioning of a casino, there could be positive impacts to the economy and spillover impact on other local businesses. These impacts detailed in the full report and are explained in this infographic provided by Fourth Economy and DRF. 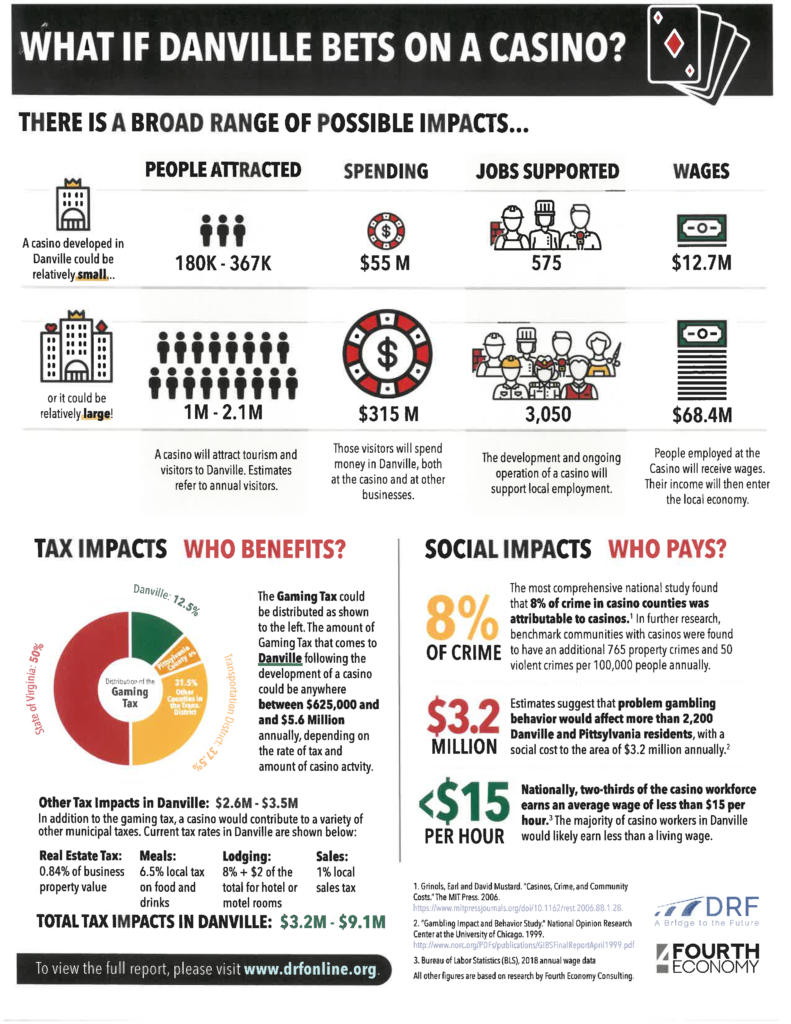 Paytas pointed out that the social impacts of casino development need to be anticipated and funded. A program to address problem gambling will be needed. A plan for heightened policing is needed. Casinos are 24/7 operations and would generate a need for 24/7 daycare operations to allow parents of young children the opportunity to work evenings and nights.

Paytas explained that the greatest potential for positive impacts is contingent on the casino being developed in coordination with an overall tourism strategy to attract people in from outside of the area and to maximize the spillover benefits to surrounding businesses. Paytas noted that if a casino is embedded, transportation and traffic patterns must be able to handle the influx of daily visitors.

To this point, Danville-Pittsylvania County does have a tourism commission under leadership of the Chamber, which maintains the Experience Danville-Pittsylvania website for locals and visitors to explore area attractions. As to embedding the casino among existing business, the City of Danville’s RFP features the White Mill site for potential casino development. The White Mill, a 650,000 square foot vacant property located on the Dan River, would place the casino in a central location in Danville’s revitalized downtown district and adjacent to the Riverside Drive business concentration. The White Mill site is also being actively marketed for adaptive/multi-use potential using this fly through animation video.

In summary, there are still many unknowns about the potential impact of a casino in Danville. Any impacts on Danville would flow across borders to surrounding localities. Continued due diligence and planning is needed to consider whether a casino is a good investment for the City of Danville, and if so, what size makes the maximum impact, and which casino operator will be the best fit for the region.

There is time to proceed strategically, thoughtfully, and collaboratively – something that the team of leaders and economic developers in Danville and Southern Virginia strive to do daily. According to the JLARC report, casino development may take up to four years.